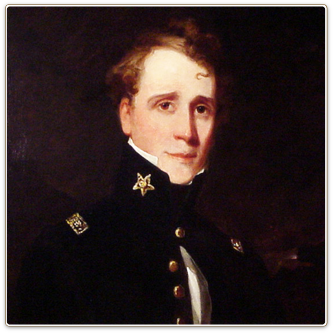 ”I thought it no crime to leave my home in the United States, and hazard my life in what I believed to be a righteous cause. How I bore myself in that memorable campaign, and whether I have merited honor, or infamy, I shall leave you to determine…”

— Defence of Gen. Sydney Sherman, Against the Charges made by Gen. Sam Houston

Commander, left wing of the Texas army at the Battle of San Jacinto

Sidney Sherman was born in Marlboro, Massachusetts. Orphaned at the age of 12, he survived as a clerk in a Boston office. After a series of commercial endeavors, he became a successful manufacturer. His business skill took him to Kentucky, where he processed cotton mechanically and became captain of a company of the Kentucky militia.

Sherman was enthusiastic about the struggle and opportunity in colonial Texas. In 1835, he sold his cotton enterprise and used the proceeds to outfit a volunteer force of 52 militiamen. Sherman and his Kentucky fighters left for Texas at the close of 1835, bringing with them the only flag the Texians had to fly during the Battle of San Jacinto.

Once in Texas, Sherman and his men raced to San Felipe for their orders, which would eventually place Sherman in charge of Houston's Second Regiment of the Texas Volunteers. Their day in the field would come soon enough.

During the Runaway Scrape, Sherman was impatient to engage the Mexican Centralists and show them the rage their heavy-handed policies had inspired. At the Colorado River, Sherman begged to let his men cross and fight with Mexican forces under the command of Joaquín Ramírez y Sesma.

But Houston would not allow it.

The day before the Battle of San Jacinto, Sherman organized an attempt to seize General Santa Anna's cannon, but the cannon had been withdrawn. But the next day, April 21st, 1836, Sherman would finally receive satisfaction.

Sherman led the left wing of the Texian army that fateful day, finally giving his men a taste of action. It was Sherman who was credited with the cry: "Remember the Alamo!" When Texian forces had won the day, Sherman was in charge of distributing the Mexicans' captured arms, supplies and useful property among Texian soldiers.

After the battle, Sherman rose to the position of Major General of the Militia. When Texas was annexed to the United States, he resumed his role as a businessman. He was running a hotel in Galveston, Texas, at the start of the Civil War, when he was appointed Commandant of Galveston. He died in 1873.