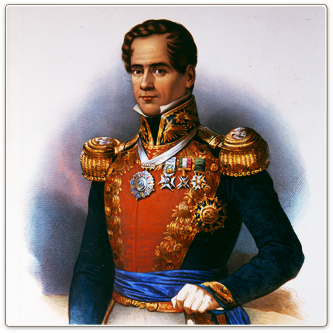 ”As general-in-chief I fulfilled my duty by issuing the necessary orders for the vigilance of our camp, as a man I succumbed to an imperious necessity of nature for which I do not believe that a charge can be justly brought against any general, much less if such a rest is taken at the middle of the day, under a tree, and in the very camp itself.”

— Santa Anna, from The Mexican Side of
the Texas Revolution

General, led Mexican forces at the Battle of San Jacinto

Born on February 21, 1794, in Veracruz, Santa Anna enjoyed a middle-class upbringing. After some formal education and a short career as a merchant, he was appointed to the infantry. It was a good fit for him.

He fought Mexican rebels under the Spanish for years, receiving several promotions. But in 1821, he switched sides and led the rebels under Agustín de Iturbide. Eventually made governor, he became a national hero fighting the Spanish.

Santa Anna was elected president of Mexico in 1833, the first of five presidential stints. But his autocratic centralism caused rebellion at the local level. It was in this context that his army marched north to Texas.

General Martín Perfecto de Cos marched to Texas ahead of Santa Anna intent on punishing the rebels. But Cos' loss of Goliad, as well as the initial (and less famous) struggle at the Alamo in 1835, proved an embarassment to Santa Anna. In part, his Alamo siege was a matter of family honor.

After regaining honor at the more famous fall of the Alamo in 1836, Santa Anna felt his job in Texas was done. But under counsel, he decided to take one final swipe at the Texas rebels by dividing his army and sweeping the land. The resulting campaign led to the Battle of San Jacinto.

It was a disaster for Santa Anna. The Mexican army was completely surprised by the stealthy Texians, roused from an afternoon siesta without the chance to organize. Santa Anna was captured, sent to Washington D.C., and eventually returned home.

But his career was far from over. He fought the French in 1838, losing a leg in battle, and led the Mexican army to defeat in the Mexican War.  He remained in and out of the Mexican limelight — sometimes in exile — until retiring in 1874 to write his memoirs in Mexico City. He died on June 21, 1876.

While eccentric and arrogant (he fancied himself the “Napoleon of the West”,) Santa Anna was nothing if not astute. His heavy-handed tactics in the Texas Revolution were a function of his training. And his political shifts showed his mastery of reading the political tea leaves rather than a penchant for disloyalty.