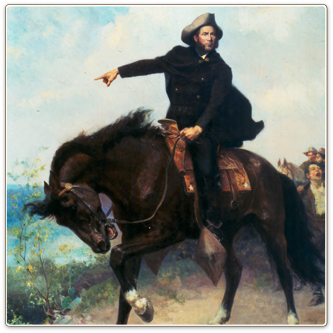 ”We view ourselves on the eve of battle. We are nerved for the contest, and must conquer or perish. It is vain to look for present aid: none is at hand. We must now act or abandon all hope! Rally to the standard, and be no longer the scoff of mercenary tongues! Be men, be free men, that your children may bless their father’s name.”

Houston is one of the most powerful figures in Texas — and American — history.

He was born in Rockbridge County, Virginia. When his father died in 1807, his family moved to Tennessee and started a farm. Houston resisted the idea of farm work or helping out at their family's small store in nearby Maryville. In 1809 he went to live with nearby Cherokees who adopted him as "The Raven".

Houston joined the army in 1813, where he excelled. Wounded at the battle of Horseshoe Bend, he gained the favor of Andrew Jackson. He served the government in Indian affairs, studied law, and quickly rose to public office. Eventually, Houston was Attorney General, a member of the U.S. House of Representatives, and Governor of Tennessee.

After a brief unhappy marriage, Houston retired from Tennessee politics to live among Indians in what is now Oklahoma. Gradually easing back into politics, he migrated to Texas where he served as a delegate at the Convention of 1833.

Houston was soon citing the need for military action against Mexico, and in 1835 was appointed major general of the Texas army. Houston made peace with the Indians of the region so the Texians could focus on their push for Independence without distraction. Soon he would organize the Republic of Texas's first army.

When Santa Anna's forces drove the Texians from the Alamo and across the state, Houston struggled to keep his forces intact. The Mexicans, though marching with limited supplies and support, had many trained professionals in their army. Not so with the Texian army.

But the Texian soldiers wanted to take a stand, and Houston's series of retreats were unpopular among the men. They wanted a fight. And eventually Houston would give it to them. While the two sides camped a scant mile apart, it was Houston's decision that brought the army's council of war to lead an attack the afternoon of April 21st, 1836.

During the Battle of San Jacinto, Houston was shot in the ankle. But with the Texian's overwhelming victory that day — and his capture of Santa Anna — Houston's heroism and leadership in the name of Texas was confirmed. He was elected president of the Republic of Texas. Twice.

The City of Houston, now the fourth largest city in the United States, was named in his honor. Upon Texas's annexation to the United States, he was appointed to the U.S. Senate. He was elected Governor of Texas in 1859, though his pro-Union stance all but ended his political career. He was the only man to serve as governor of two different states.

Houston died of pneumonia at age 70. During his last years, he enjoyed a loving marriage with his wife Margaret, with whom he had eight children. Some say his last word was: "Texas!"

Learn more about Sam Houston in Veteran Biographies. To learn more about the key events of the Texas War of Independence, check out our interactive timeline.