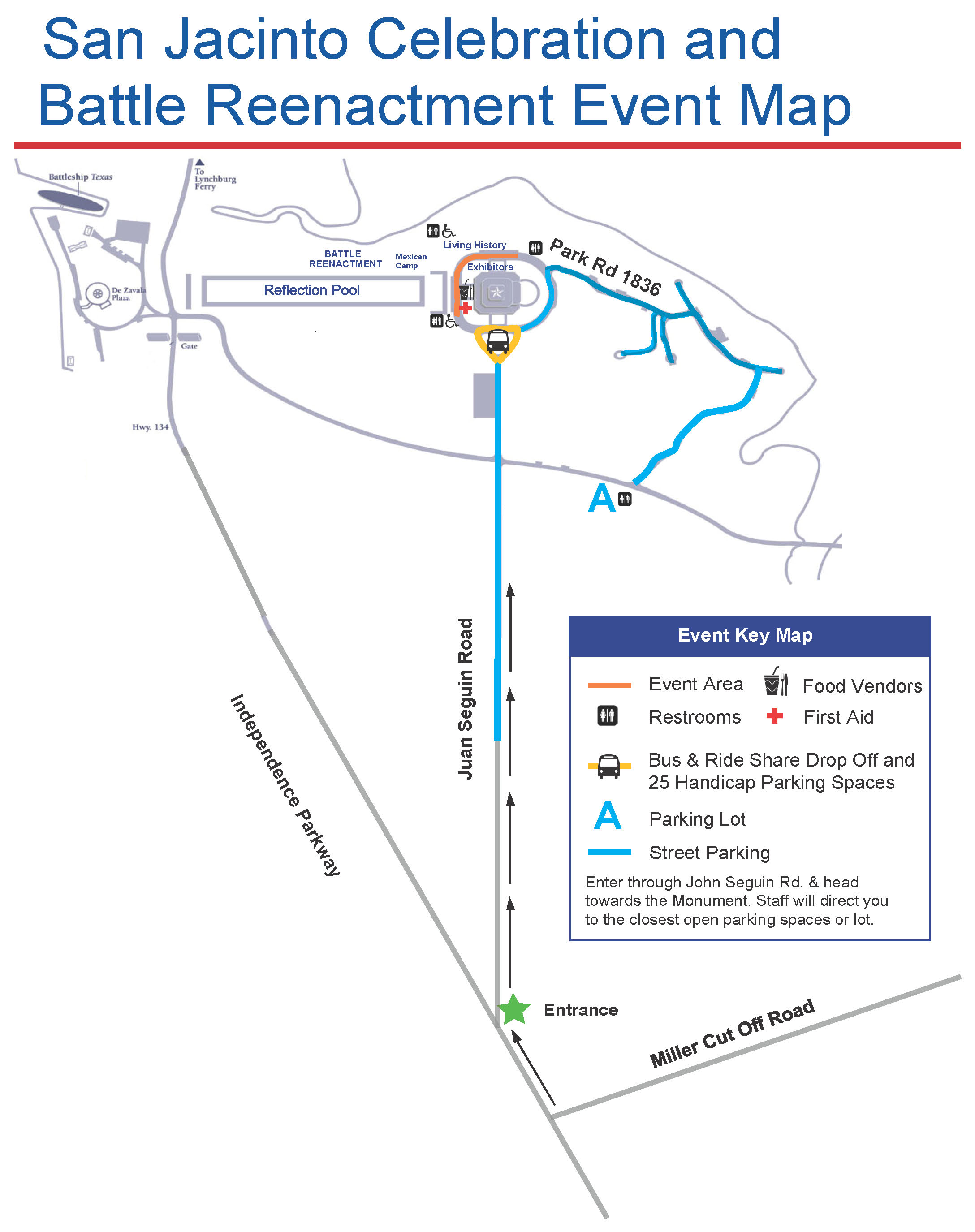 Rideshare Drop-off will be on the southeast side of the San Jacinto Monument.

Please note that there is no off-site parking this year, so carpooling and rideshares are encouraged.

As the Mexican army rolled east from San Antonio, terrified Texians abandoned their homes and fled for the safety of Louisiana.  This panicked evacuation, mostly women, children and enslaved people, was known as the Runaway Scrape.  Refugees braved hunger, disease, flooded rivers and freezing rain on their journey.  Nearby Lynch’s Ferry was a major escape route, and thousands of people used it to cross the San Jacinto River in the weeks before the battle.  While their husbands and sons fought for Texas’s independence, the bravery and resilience of Texas women ensured that their families survived.

The first shots at San Jacinto were fired the day before the famous battle.  The two armies made their camps the morning of April 20th.  They exchanged cannon fire for a few hours, but neither did much damage, and the Mexican army withdrew.  Late that afternoon, Colonel Sherman led the Texian cavalry on what was supposed to be a simple scouting mission but, eager for a fight, his men directly charged the Mexican cavalry and were soon under heavy fire.  During the disorganized retreat, Mirabeau Lamar’s daring heroics saved the lives of two men, and the Texians made it back to their camp alive.

The tall prairie grass rustled in the late afternoon sun on April 21st, one of the few signs of the Texian army’s passage.  They were nearly on top of the enemy camp before the Mexicans realized they were under attack.  Amidst the roar of cannons, the Texian infantry fired one round, then charged the Mexican breastworks, shouting “Remember the Alamo! Remember Goliad!”  Eighteen minutes later, the Mexican army was in a panicked retreat.  After the battle, Texians, enraged by the massacres at the Alamo and Goliad, continued to hunt down and slaughter Mexican soldiers until dark.  650 Mexican died at San Jacinto. The Texians only lost nine men.

The Texian Army was victorious at San Jacinto, but they failed to capture General Santa Anna, who fled the field in an attempt to reach the rest of his army.  He was caught hiding near Sim’s Bayou the next day by a Texian scouting party.  The Texians didn’t discover their captive’s identity until they returned to camp and the Mexican prisoners began shouting his name.  Santa Anna was brought to an injured General Houston and agreed to order his army out of Texas in exchange for his life, guaranteeing that the Texas Revolution ended at San Jacinto, the birthplace of an independent Texas.